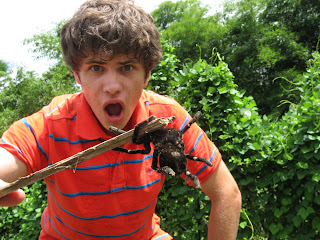 Here is James Manson, one of our interns, with a tarantula (Haploplema minax?) that the Seed Bank staff dug out of one of the seed production beds recently. When asked what they did with the spider, James said the staff decided to bury it back in the bed alive. Why? The staff replied, "Where there are tarantulas, there are no snakes." Apparently, they'll take the spider over snakes.

Incidentally, James also dispatched one of these in his room last month. Apparently, the tarantula/snake rule doesn't apply to James' domain.

Haploplema are burrowing spiders and can inflict a bad bite. Reportedly, the venom isn't fatal unless the hapless victim is particularly allergic.

And though we appreciate the conservation ethic of the Seed Bank staff, we also want James and others at the seed bank to be safe. Fortunately, despite his two recent encounters with tarantulas, sightings around the Seed Bank have been quite rare.
Posted by Rick Burnette at 5:39 PM No comments: Links to this post