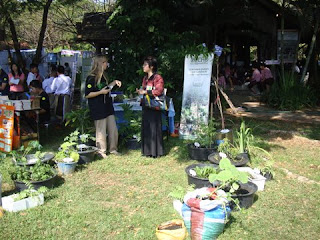 ECHO Asia was invited to set up a demonstration at the Thai Environment Day exhibition in Chiang Mai.  So we packed up our portable container garden comprised of basins, buckets and even sacks, and hit the road.
Containerized crops that were exhibited included okra, water spinach, vegetable fern, taro, tomato, chili peppers, Malabar spinach, eggplant, katuk and moringa.  A small terrarium full of vermicompost-making earthworms was thrown in as well.  Wah (Seed Bank Manager) and Kimberly (intern) spent Dec. 2-4 meeting thousands of students and adults and encouraging everyone to grow whatever they can wherever they can.
Posted by Rick Burnette at 9:22 AM No comments: Links to this post 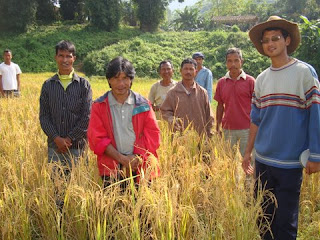 I recently visited northeast India to follow up on an ongoing consultation effort for NEICORD, an NGO based in Shillong.  It was my third visit over the past two years.

It was good to see the fruits of labor related to the cooperation of NEICORD with a dozen communities in the Partharkhmah area just south of Guhawati.  With NEICORD involvement, since 2009, dozens of farmers have been experimenting with the System of Rice Intensification (SRI) and Sloping Agriculture Technology (SALT) in addition to another couple of hundred persons who have begun making small kitchen gardens.  Practically all of the persons interviewed expressed satisfaction with their endeavors with intentions to continue as well as promote such approaches among their families and neighbors.
I was also intrigued/impressed with a number of their own farming approaches.  One included stripping grains by hand from the stalks of rice in their hill fields (see video clip).  I understand this is done mainly on extremely steep land, eliminating the need to cut, bundle, stack and thresh the crop in such precarious locations.
Another interesting rice system technique encountered there is the use of cattle to tread upon harvested rice to thresh crop (see video). 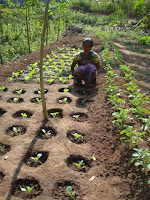 Finally, I was surprised to find zai holes of a sort being used in the kitchen garden of a Garo family.  Zai holes are traditionally employed in West Africa crop production.  According to the ECHO classic, Amaranth to Zai Holes, West African crops, such as millet, are grown in holes around 20x20 cm wide and 10 cm deep.  The holes are filled with mulch or compost, such as manures or crop residues.
Similar to the West African zai holes, some of the Garo make similar holes filled with a mixture of soil and manure.  Prijilla, the gardener, observes that vegetable crops planted on raised beds seem to grow a bit faster.  However, if water is short, the raised beds dry out much more quickly.  Therefore, the zai holes help extend soil moisture for dry season gardens.
Posted by Rick Burnette at 9:22 AM No comments: Links to this post 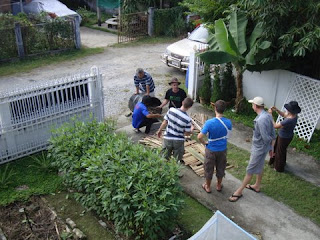 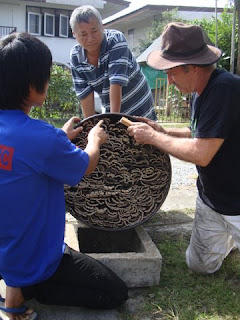 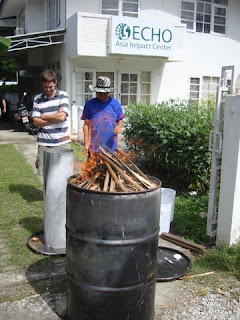 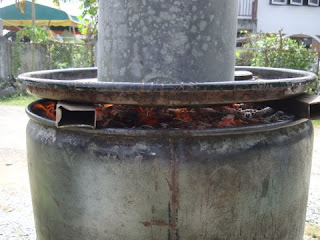 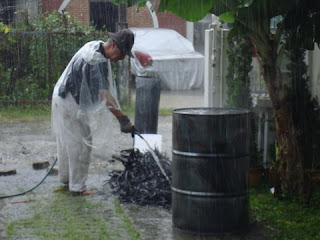 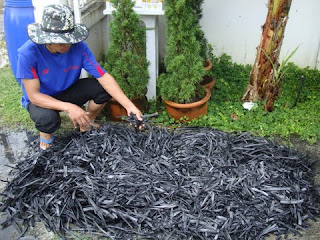 During the recent ECHO Asia Agriculture and Community Development Conference, Dr. Karl Frogner presented a plenary session that introduced the concept of biochar as well as an afternoon workshop during which the production of biochar was demonstrated.  Biochar is carbonized material, such as wood charcoal, that is ground up and mixed with materials rich in plant nutrients (such as animal manure) for at least of few months.  Such contact with the fertile, organic materials will allow absorption of nutrients as well as agriculturally beneficial microbes into the pores of the char.  Afterward, the char is incorporated into the topsoil of plant beds and fields.  Applied in such fashion, biochar reportedly benefits crop production by serving as a supplemental source of plant nutrients as well as a soil-based residence for beneficial microbes.  Biochar is also promoted as a means of sequestering carbon to help mitigate climate change.

Although the production and use of biochar is an ancient practice in some parts of the world, the science behind the approach is still new.  To better understand the potential of biochar for small farms in the region, ECHO Asia is preparing to work with UBI, Dr. Frogner's organization, to test the effects of biochar related to crop production at the ECHO Asia Seed Bank.
In October, Dr. Frogner worked with ECHO Asia staff and volunteers to develop a prototype biochar oven made from a 200-liter barrel.  Sliced segments of bamboo where charred in the oven during a test run of the equipment.  Despite a downpour during at the end of the burn, the char turned out very well.
ECHO Asia will be reporting on the progress and results of the upcoming trial.
Posted by Rick Burnette at 12:53 PM No comments: Links to this post

The 2011 ECHO Asia Agriculture and Community Development Conference was held during October 4-7 at the Empress Hotel in Chiang Mai with 157 registered delegates from 10 Asia countries and beyond.  Nine plenary sessions included diverse topics such as farmer managed natural regeneration of forests (Tony Rinaudo), the potential of grain amaranth (Tom Post) and the access of protein for diets in the Papua Province of Indonesia (Dr. Di Mathews).  Afternoon workshops related to dozens of practical and technical development topics were also offered.

One of the most popular components of the meeting were the post-conference tours that were held in 10 locations in and around Chiang Mai.  One of these was the Green Manure/Cover Crop and Agroforestry Tour among the upland hill fields of Pang Daeng Nai community in the Chiang Dao district.  Participants were able to see how local farmers have been using viny legumes to maintain the productivity of their permanent hill fields and appreciate the community's highly diversified and productive agroforest plots.
Posted by Rick Burnette at 12:49 PM No comments: Links to this post