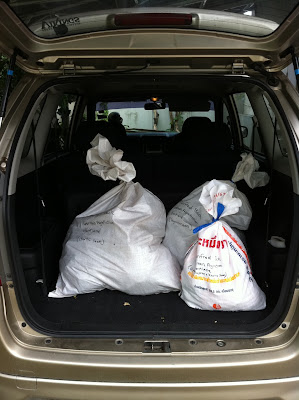 This week the ECHO Asia Seed Bank sent its largest seed order yet. Not being a commercial seed supplier, usually ECHO's orders are limited to free, small sample packs of seeds sent out to development workers serving in poor counties. Recipients can evaluate the seed in their locations and, if possible, multiply seed for the benefit of their clientele; usually small-scale farmers and gardeners.

However, ECHO Asia carries select types of seed in bulk quantities; mostly green manure cover crops. As long as supplies last, ECHO network partners in Asia can purchase (to cover costs) between one hundred grams to a few kilos of such seed.

This particular combined order, over 60 kg total, was sent by bus from Chiang Mai to a city near the Lao border. Six agricultural development agencies will be testing these seeds on their farms and focus communities. Hopefully much more seed will be propagated from this large order.
Posted by Rick Burnette at 7:13 PM No comments: Links to this post 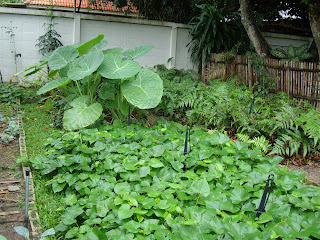 Our family ate a lot of sweet potatoes when I was a kid. Along with Irish potatoes, Ipomoea batatas was a main garden staple. Truth is, I kind got sick of them and never grew any after I left home.

However, through the years, I've rediscovered a new fondness for the root crop, especially the orange varieties. The sweet potato is poor man's food, and Asia grows its share. However, many are white flesh varieties which I find a bit bland.

Over the past year, the humble sweet potato has gotten some very favorable press. Last Thanksgiving, New York Times Op-Ed Columnist, Nicolas Kristof, wrote a glowing piece about the role of orange sweet potatoes specially bred to help fight hunger in Africa (http://www.nytimes.com/2010/11/25/opinion/25kristof.html). Orange sweet potatoes are packed with beta carotene, a natural source of vitamin A, much needed by the human body.

Fortunately, orange sweet potatoes are easy to grow in our part of tropical Asia. 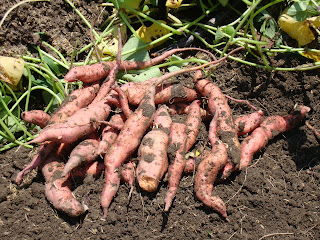 In early December 2010, I bought sack of orange tuberous sweet potato roots from a local market (not easy to find) and planted them in one of our garden beds. We ended up with a ton of slips. I then transplanted some of these slips into four short rows around New Year and waited until mid-April to begin digging. I was delighted to find well-formed, tasty roots.

Friends and neighbors got their share. In fact, we only had enough left over for one meal. Ellen sliced the tubers, added seasoning and baked them until they began to brown. Delicious.

Now, the locally-adapted orange sweet potato variety is growing in the demonstration garden at the ECHO Asia office. Interested persons who drop by the office can picked up a few slips to take home with them.
Posted by Rick Burnette at 7:11 PM No comments: Links to this post 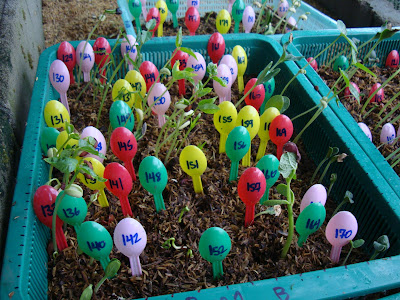 Recently I entered the nursery at the ECHO Asia seed Bank for a quick look. I was surprised by the burst of color in one of the plant beds in which seeds recently acquired from communities in northern Thailand and Cambodia were being tested for germination and vigor. Vinny, the intern in charge of the test, explained that the multi-colored plastic spoons used to mark each seed were not only cheap and reusable but "way more cool" than boring white spoons. The seed bank staff also said that the previous array of white spoon markers looked a bit too much like headstones in a tiny cemetery, which they seemed to think was kind of depressing. So for a more cheerful looking seed vigor trial, multi-colored plastic spoons are definitely the way to go. Also note the phototropic effect going on with the bean seedlings.
Posted by Rick Burnette at 7:04 PM No comments: Links to this post