Being involved in agricultural development work in Asia, obviously a major concern for ECHO Asia Regional Office clientel is rice production. A fairly recent rice farming innovation is known as SRI (System of Rice Intensification). Some key SRI distinctives include:
When managed properly, the reduced plant competition, increased soil oxygen and improved soil conditions can offer some interesting results. For example, the number of tillers (stalks) produced by a single seedling in a SRI system can multiply to 20, 30 or more. This is much higher than the typical 10 to 15 tillers produced by a single hill of conventional rice that is usually established by transplanting several seedlings together.

Increased numbers of tillers generally translates into higher rice yields. Worldwide, SRI rice farmers are reporting increased yields that are 50% to 100% higher or even more (http://ciifad.cornell.edu/sri/) compared to conventional systems.

There are reported drawbacks to the system. Managing water levels to reduce flooding can be a challenge in many locations. Also, with reduced flooding, the consquence will be increased weed pressure.

Fortunately, appropriate technology has been developed to reduce the labor of weed removal. The cono weeder, a simple, hand-operated rotary cultivator, is one such innovoation. Reportedly developed at the International Rice Research Institute (IRRI) in the Philippines, these machines are being mass produced and sold in various locations in Asia. 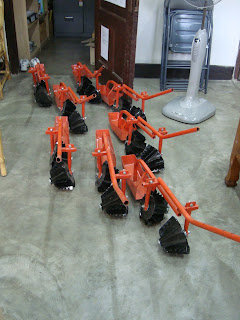 Unfortunately, until recently, SRI rice producers in norhern Thailand had no such implement available. But earlier in 2010, a group of 10 farmers and development organizations pooled an order for cono weeders from India. The ECHO Asia Regional Office helped to organize the pool and distribute the weeders.

So far, reports about the new weeders have been positive. The clip at the top is the Cono Weeder being used at Fair Earth farm (http://www.fairearthfarm.com/) just outside of Chiang Mai. Besides uprooting and incorporating weeds into the earth, the cultivator also aerates the soil, increasing the supply of air to rice plant root systems.
Posted by Rick Burnette at 8:32 AM No comments: Links to this post