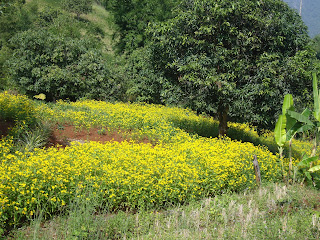 In 2010, an ECHO Asia Notes article entitled The Recent Introduction of Niger Seed (Guizotia abyssinica) Production in Northern Thailand described how the production of Niger Seed, a drought-hardy oil crop, has spread farmer-to-farmer along the Thai-Myanmar border.  In the meantime, ECHO Asia has also released numerous sample packets and bulk orders of Niger among our regional partners.

During a recent trip to Pang Daeng Nai village in Thailand's Chiang Mai Province, a community known for its agroforestry and green manure/cover cropping efforts, our friend Nam Saeng showed us his freshly expressed Niger seed oil from the crop he produced in 2012.  He reports that approximately two liters of Niger seed broadcast over roughly 1600 square meters of permanent hill field produced enough seed to fill six 20-liter cans.  This amount of seed yielded enough oil to meet his family's estimated needs over the next year.  He says that neighbors have noticed his results and expects others to begin planting Niger as well.

One of ECHO Asia's key roles is to highlight such underutilized crops for the benefit of smallholder farmers who often cultivate marginal land.  However, one need expressed by Nam Saeng is access to a low-cost mill to express oil for crops such as Niger seed (he had to travel some distance to have his seeds processed).  That leads to another key ECHO Asia role; locating and/or encouraging the development of appropriate technology for partnering development organizations to promote among their focus communities. 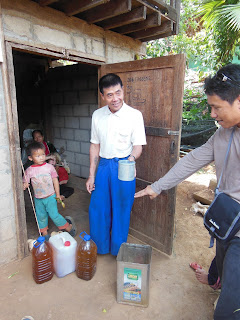 Posted by Rick Burnette at 8:24 PM